Maple Grove Magazine: "When You Aren't There For Them" 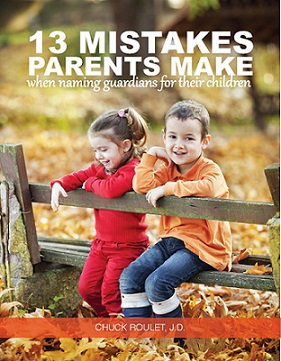 “PARENTS SIMPLY DON’T KNOW WHAT THEY DON’T KNOW when it comes to protecting their kids in the event [that] something were to happen to them.” It’s one of the early wake-up calls found in a book full of wake-up  calls entitled, What Happens to Them? by Maple Grove attorney Chuck Roulet. What Happens to Them? is about how families can most effectively plan for their minor children’s physical, emotional and financial care in the unlikely, but critical, case of two parents’ simultaneous death or disability. And, because Roulet would like nothing better than for parents everywhere to understand the implications of “not knowing what they don’t know,” copies of this concise, informative and clearly written book are available free of charge.

In case you are convinced that you know more than most, consider this question from Roulet’s book: Have you and your spouse nominated a short-term guardian for your children, an emergency first-responder who has accepted the responsibilities of power of attorney and medical power of attorney, and whom your children and their caretakers (schools, friends, other relatives) know how to contact on short notice?

If your first response is “No!” and your second response is “Who thinks of these things?” you aren’t alone. And yet the answer is disturbing: Whereas in the past children might have been carefully and lovingly transferred to the home of grandparents or a close friend, Roulet shares many instances in which children ended up in temporary foster care instead.

“Many of the estate plans being created for clients were based off of plans used for people in their 60s and then just re-used for clients with minor children,” Roulet writes. In conversation, he adds, “I’ve written this book specifically for families with children under 18, with some significant attention to what to do when kids turn 18.” Traditional estate planning is based largely on division of assets. What Happens to Them? addresses the additional topics of guardianship, wills vs. trusts, when to release assets, issues with blended families and special needs children. It also specifies three documents your college-bound student should never leave home without.

There is even a chapter on legacy. Roulet suggests parents consider leaving their children a voice recording or DVD telling each child, for example, how special they are. “People don’t have to do any estate planning,” Roulet says. But any planning you do, from writing a will to establishing a trust to making a DVD, he says, “is a gift you leave to those you leave behind. The better you plan, the easier it will be on everybody.”

Roulet is a young man himself. He and his wife live in Maple Grove and have two daughters, ages 8 and 14. How did he  come to understand the critical differences in estate planning for young vs. older families? Late in the book he describes a situation in which his life was suddenly and unexpectedly at risk. At that point it was clear to him that his wealth included more than just money or things.

Roulet has dedicated much of his professional attention to planning for all aspects of children’s lives in the absence of their parents. He speaks all over the United States on estate planning and business law, including continuing education classes for other attorneys. He is in the process of writing three new titles: a guide to finding the right estate planning attorney; a book covering the special needs of the 52- to 67-year old client; and a book that summarizes the most common mistakes people make in estate planning, even with the help of an attorney.

So, if you thought you had it all wrapped up in a will, think again. And if you don’t have a will, get a copy of What Happens to Them? by Chuck Roulet. Yesterday.

Reprinted with permission of Maple Grove Magazine. ©2016, all rights reserved. Any reproduction of this document is strictly prohibited. For reprints call 612.548.3466.